Professor Steve Gallik has been developing an Online Laboratory Suite for his Biology labs over the last couple of years. It is an online application that guides students through laboratory experiments programmatically, making calculations and allowing them a space to record and store their data on the web. To get a sense of how it works, watch his screencast demonstrating the uses of his Cell Biology Online Laboratory Manual: The following post is from Professor Anand Rao’s Visual Rhetoric course blog, he absolutely nails the significance of the political event this evening beautifully:

There is a very long backstory to tonight’s acceptance speech by Barack Obama. As over-exposed as he may appear to be, there are still many Americans who do not know much about Obama, and the acceptance speech is his opportunity to reintroduce himself to the American public, and outline what he feels they need to know about him.

This is Obama’s night, and there has been some friction between the two campaigns as the possibility of John McCain’s campaign leaking McCain’s VP pick on the same night. The McCain campaign has pledged to not announce the VP pick tonight- but they also had to decide whether to not air or say anything tonight, or to run a negative ad tonight. Instead, Sen. McCain aired the following:

No precedent for this- nothing like it has been used in past campaigns.

As the McCain ad mentions, this is an historic night, as it is the 45th anniversary of Dr. Martin Luther King, Jr.’s famous “I Have a Dream” speech. Here is a copy of that speech:

If you did not see it live, here is a copy of the speech given by the Democratic nominee, Sen. Barack Obama: (not available yet- I will post it once it is)

For this blog entry, outline what you think was the most important argument laid out by Sen. Obama, why you think it is so important, how you think Sen. McCain could respond, and what audience Sen. Obama was speaking to with that argument (not just the general audience- what group of voters would he expect to find that argument appealing). Finally, how effective was the speech, and why?

Over at the Mud Pit, Shannon Hauser has begun sharing her learning process again, and it is always a pleasure when she does. She is taking Dr. Greg Stewart’s “Faulkner and Morrison” seminar, and offers up two great resources. The first is the image in this post that partially superimposes the faces of William Faulkner and Toni Morrison, beautiful! The second was discovered through a recommendation by her classmate Mary-Kathryn, and it is one of the greatest speeches ever given: William Faulkner’s Nobel Prize Acceptance Speech. Now available below (in wonderful mono!) on UMW Blogs. Enjoy the Mississippi twang and thanks go to Shannon for the links and some culture!

And, as an added bonus, I just found Toni Morrison’s Nobel Prize Acceptance Speech freely available online, I’m gonna have to give it a listen. 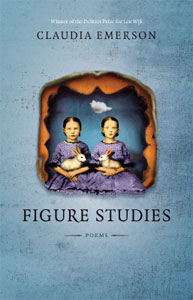 Claudia Emerson’s most recent book of poetry, Figure Studies, is being featured today on the Poetry Daily website. I don’t know about you, but this may very well be the coolest cover I have ever seen on a book of poetry, and makes for certain that there can be no question the Southern Gothic is alive and well at UMW. Congratulations Claudia!

This Summer, after two millennia of silence, two students from professor Gosetti-Murrayjohn’s The Classical Tradition (a 100 level course) brought Vergil “back to life.” Jessica Eadie and Lauren Heft’s project, “War in the Aeneid“, incorporated a wide series of web-based tools to effectively integrate digital storytelling into their presentation. This site provides an excellent example of how narration and presentation might be creatively re-imagined with the abundance of resources currently available online combined with a powerful publishing platform like UMW Blogs.